Myanmar, also called Burma, takes up a landmass the size of Texas, yet has nearly twice the population, with 54.8 million residents. A beautiful country with a majority Buddhist population, Myanmar is rich with history, architecture, precious gems, incredible landscapes, and diverse culture. The country has a long history of foreign colonization and local military rule. After being under a military junta since 1962, a gradual liberalization began in 2010, leading to free elections in 2015 and the installation of a government led by veteran opposition leader Aung San Suu Kyi the following year. This led to an opening of the country, leading to an active tourism industry. Since then, an army operation and genocide against the Rohingya ethnic group highlighted the continuing grip of military rule in Myanmar. On February 1st, 2021, the military staged a coup, claiming election fraud as their reason to declare a state of emergency and arrest Aung San Suu Kyi, while giving no evidence of such fraud.

Now under the military junta again for the foreseeable future, Myanmar and the pastors and missionaries we come alongside there are facing a new and extremely difficult era. We ask for your prayers for comfort, wisdom, and strength for the men and women we partner with and serve, and for their fellow citizens. Now more than ever, we will continue to stand beside these brothers and sisters in their work of sharing the love of Christ.

With a growing network of missionaries throughout the country, 27 of whom receive regular monthly support, Harvest Bridge comes alongside pastor training, child protection and education, women’s empowerment, economic development, printing and distribution of theological materials, and disaster relief programs. In 2021, 560 families received several weeks’ worth of life-saving food supplies in the face of a hunger crisis precipitated by Covid-19 lockdowns, while 47 families who were displaced from their riverside village received support toward their relocation. Another 130 families received emergency Covid healthcare supplies, including essential oxygen supply from 25 oxygen cylinders and 2 oxygen concentrators. 59 children received monthly sponsorship, and 14 low-income women were the recipients of micro-grants to launch or invest in their small businesses. 41 church leaders received ministry training, four churches were planted, and 178 new believers professed faith in Christ, with 71 taking baptism.

Leadership Information: Our Myanmar leaders oversee church planting teams in five regions of the country, all of which are now affected to one degree or another by long-running civil war and resistance to the 2021 military coup. In addition to planting dozens of churches among unreached people groups, they have established two children’s homes and an organization that advances the well-being of tribal people.

Give directly to our Myanmar fund:

In the early hours of Monday, February 1st, the Myanmar (Burma) military staged a coup and seized power after detaining Aung San Suu Kyi and 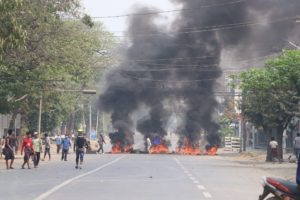 “Remember Us In Prayer, For Our Freedom”

You’ll know from reading our updates here that on February 1st, the Myanmar (Burma) military (Tatmadaw) staged a coup and seized power after detaining Aung