Bangladesh, a country bordered by India on three sides and the Bay of Bengal on its southern coast, is a country rarely discussed on the world stage. However, with over 165 million people, it is the eighth-most populous country in the world, the most densely populated non-city state, and the fourth most populous Muslim country.

We come alongside 53 Bangladeshi men and women who are reaching their country with the love of Jesus. Often while facing persecution for their faith, they focus on child protection, anti-human trafficking work, education programs, disaster relief, evangelism, discipleship, and church planting.

In 2021, over 2,500 families received life-saving aid in the midst of Covid-19 lockdowns and severe winter weather. 22 children received monthly support, enabling them to continue living with their parents or grandparents instead of being forced by poverty into an orphanage. Eight communities received water tanks, greatly improving 320 families’ quality of life. Four of our partners together rescued 96 people from circumstances where they were vulnerable to being trafficked. Nine churches were planted, five church leaders received training, and 655 new believers were baptized.

Leadership Information: Our leader in Bangladesh is the founder of a local mission organization that planted 29 churches and baptized over 3,200 new followers of Jesus in just seven years. He has served in leadership with several other international NGOs, gaining experience in missions and finance.

Give directly to our Bangladesh fund:

Bangladesh Below are the Bangladesh prayer updates since the 1st of August 2021.     February 25th   Pray for the below items.   A. 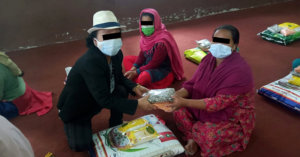