The Joy of Tusher

Last June, I stepped into a village in Bangladesh whose residents, until they met me, didn’t know white people existed.

At the time, over 175 people from animist and Hindu backgrounds had been discipled in the Christian faith for several months, and were ready to be baptized. They received the Gospel through three lay Bangladeshi pastors, who Harvest Bridge has the privilege to support.

In August, the baptism was held. Among those baptized was a 97-year old man, Tusher*, who had been an animist all his life and was an elder in the village.

The pastor told him he didn’t have to come all the way into the pond to be baptized, but Tusher insisted. He said, “No, I will be baptized with my people. I want people to see that I serve Jesus now”.

In many parts of South Asia, baptism is seen both by Christians and non-believers as the final break with one’s former religion. As such, our partners in Bangladesh do not baptize anyone until they’ve been discipled in the faith for at least three to six months. They want the gravity of this decision to be fully understood.

So, local Muslim leaders knew they had permanently lost these 175 villagers to Christ.

In the following weeks, all those who had been baptized were refused water by Muslims in their community. Men were assigned to watch the communal well and attack any Christian who came near.

Families either had to drink from filthy pond water, or walk miles to collect clean water. The area where they went to collect water was also unfriendly to Christians, and especially dangerous for the women.

We immediately reached out to The Voice of the Martyrs, who responded quickly with a grant. By the beginning of October, a new well was in place, set next to a thatched home that doubles as a church.

This time, the well was not attacked, and these brothers and sisters began sharing the water with other marginalized people in their area.

In April, I stepped back into this village.

I cannot express what was going on in my heart as I was welcomed by a traditional cultural dance, complete with drums, gorgeous dresses, and confetti.

97-year old Tusher was at the front, singing and dancing with pure joy all the way down the dirt road to that thatched house church.

It was a beautiful reminder of how Christianity does not undermine cultures, but enhances them. Tusher hadn’t been taught to give up his culture – his clothing or food or music – in order to follow Christ.

No, what he gave up was guilt. He gave up almost a century of striving to please idols, of worrying that the crops weren’t growing because he hadn’t fulfilled a ritual, of wondering what would happen after he died.

What he gained was joy. Absolutely breathtaking joy. The joy that comes from knowing you are free. Free from sin and death, and fully known and loved by the Father.

As I sat in that church, covered in sweat and confetti and holding a precious newborn, I couldn’t keep from crying. These new believers have faced so much more opposition in a year than I have in my entire life.

We worshiped with and prayed over each other. I held back tears as I told them how much their story had impacted me, and how incredibly humbled I was to be their sister.

This congregation, and especially Tusher, has shared their joy with others.

Over 60 more believers will be baptized next month from that village. 60! And they know what they’re getting into.

They know this is the last break with their old religion. They know persecution is coming. They just saw the first 175 believers go through it. And they know that isn’t going to be the end of it. More challenges will come.

Yet, they have the Hope of Christ. They have His joy.

What an incredible privilege that you and I get to call them our brothers and sisters.

PrevPreviousA Journey Through The Himalayas
NextWith Hope on the Horizon in Myanmar, Conflict ContinuesNext 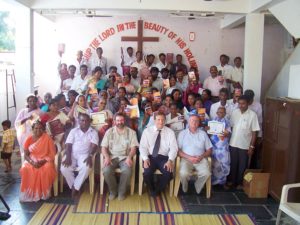