“In Nepal, from the early days, women are the ones who are expected to care for the family and do all the hardest work. It has been true for generations. Women do not have opportunity for education or learning job skills or being involved in social things. If they want to do something, including getting medical care, they need permission from their father or husband. I know women who have died because of this. I do not want this for my daughters’ generation.” ~Jandi* in Nepal

Jandi* is the wife of our Nepal coordinator, Shalva*, and co-leads much of the ministry with him.

She grew up the only daughter of Sabita*, who at age eight became the first of three wives to her husband. Having become the first follower of Jesus in her family, Sabita raised her daughter with a deep love of Jesus and others, a complete reliance on Him, and an extraordinary work ethic.

Shalva became the first believer in his own family, which belongs to the Brahmin caste – the highest social class in Nepal’s caste system. Because of his Christian faith, he was disowned by his family in his early 20s.

Since marrying over two decades ago, Jandi and Shalva have forged a life firmly built on faith.

Even while living in a rented flat in Kathmandu, they began to take in elderly widows to care for them in their final days. They have fed, clothed, cleaned, and defended these women, and in most cases have carried out their final wishes and funerals. Over the years, they’ve cared for 35 widows in their own home, and another 15 women outside their home.

They did this in faith while raising their four children, trusting God to provide day to day for their physical and spiritual needs.

In the midst of this, Shalva became a pastor, then a church planter, and then a trainer of church planters. He has helped thousands of lay pastors plant and grow thousands of churches throughout Nepal, which now has one of the fastest-growing Christian populations in the world.

Jandi and their elders oversee the ministry of the home church, while she also does the administrative work for Shalva’s church planting. Currently, she is organizing a women’s health camp in rural parts of the country.

Jandi’s passion is seeing and showing how Jesus brings equality, health, and freedom to women in her country. She has seen firsthand how meeting Jesus allows women in a society where they often face oppression to experience all three.

“Women need opportunity for education and to see and interact with the world.

One of the women who lived with us had been forced out onto the streets by her husband. Even though she should have rights to property, he would not let her have it. I talked to her brothers and after I threatened to go to the government, they spoke to her husband and now she has her property rights that will not be taken away. We have done similar things to defend other elderly women too.

The government is encouraging people to buy property in the woman’s name so that women have some ownership. The law is there, but people ignore it. This mistreatment happens in the cities too, but in the village women don’t even know what their rights are.

Every month during menstruation, it is hard for Animist and Hindu women in rural parts of Nepal. They are mistreated and forced to stay in small huts outside. Because of this kind of attitude, women feel so much shame in talking about their health and hygiene.

The government talks big about changing this and has torn down many huts, but these are rebuilt as soon as the government leaves.

They are doing nothing to change hearts and minds of women and men.

Women work within the house and take care of everybody, but no one takes care of them. So women don’t share about their health, because no one asks. They have a mindset of, ‘Oh, I have a little fever, but I am ok, I will keep working’, and so they don’t do anything about ongoing health problems.

‘Who is there to listen to me?’ They think this way.

But women who know Jesus think – ‘Jesus loves me, Jesus hears me, so I can tell Him.’

So they share this in prayer fellowships. They are never forced, but they willingly open up. As I and other Christian female leaders in Nepal have led prayer groups, we have seen that the ladies who come to church prayer meetings feel safe to talk about their women’s health issues.

Some are sharing their problems for the first time in their life.

Women can help each other once they know about their problems. Female leaders can give advice on what to do. God gives wisdom to us and we are encouraging treatment and helping women to go to hospitals. We will even go to the hospitals with them. We pray and then we act.

God has given great work to the women of Nepal.

In church fellowships we teach about hygiene, savings, and hospitality. All women, no matter their religion, can come and speak openly in these fellowships because there is no shame there. I see women who have no privilege or rights come to Christ and make a great impact on society.

I was raised by a single mother, and I see how strong single mothers are, no matter their religion. After becoming Christians they become even stronger, they teach their children the Word of God, and they help other women.

My mother brought a woman to Christ, who brought another 25 people to Christ. She was an uneducated person, but after following Christ she began going to adult classes and got her education. This is common.

So many positive changes. Women become stronger and gain wisdom from the Lord. They are good learners and good teachers.

Jesus changes men too. Christian men treat women differently than Hindu and Animist men in Nepal. Because they read the Bible. They read Genesis and they see that God made women in His image, not just men.

Pray for women to take courage in Nepal. We must take one good step forward. Small positive steps can bring great change. We must just start.

Giving, Celebrating, and Keeping Watch Through Change Hearing and reading updates on how our leaders in South Asia and Myanmar have been observing the end 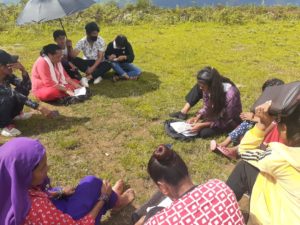