Advancing the Kingdom in Kashmir

Without a doubt, the highlight of my visit to South Asia last month was my stay in Kashmir, a beautiful region that is disputed between India, Pakistan and China.

The Indian-administered part of Kashmir is the only Muslim-majority state in Hindu-majority India.

When Britain left the Indian subcontinent in 1947, partitioning it into India and Pakistan, the ruler of Kashmir hesitated about which nation to join. Pakistan tried to take Kashmir by force, and India offered to help on the condition that Kashmir join India. Consequently, the region became contested.

Three of the four wars fought between India and Pakistan have been over Kashmir. Kashmir’s natural resources and strategic location further boost its desirability. Its people have suffered greatly as pawns in a game of geopolitical chess.

Earlier this month, in the latest “chess move”, India revoked Article 370, a constitutional provision which granted Kashmir substantial autonomy and helped preserve its distinct character by restricting the ability of outsiders to buy land or move there. India claims it revoked Article 370 to promote economic development, but locals fear this is the first step toward diluting Kashmir’s demographics in an effort to quell local separatist movements.

My heart breaks for Kashmir, in part because my experience there was the exact opposite of how it is portrayed in the media.

I was met with warm hospitality, safety, and the opportunity to see God at work in so many encouraging ways.

Christians make up less than 0.3 percent of Indian-administered Kashmir’s population.

They are effectively second-class citizens in a region where even the Muslim majority suffers in numerous ways due to India’s heavy-handed policies. Despite these obstacles, Harvest Bridge’s Kashmiri partners are amazing, resilient people who do inspiring work. Space permits me to highlight only a few examples.

Pastor Peter*, the leader of our Kashmiri partners, came to faith in Christ 24 years ago after growing up in a Muslim sect that worships at the tombs of Islamic saints. He went on to earn a doctorate and now travels around India teaching comparative religion at universities – along with his involvement in Kashmiri Christian radio, publishing Christian literature, and leading a missionary network that labors to advance the Gospel in every sphere of Kashmiri society.

He has been jailed three times, accosted by an angry mob, and falsely accused of serving pig’s blood in Communion. Yet he radiates joy and a contagious sense of humor.

So many people we met spoke enthusiastically of the enormous positive impact Pastor Peter has made in their lives.

One such person is Brother Javed*, an imposing man who wears the beard and clothing characteristic of a mullah (Islamic scholar).

Islam permits Muslim men to marry Christian and Jewish women, so when he fell in love with a Christian woman, his family did not oppose their marriage. He tried to convert her to Islam, but changed his mind after learning about Christianity’s teachings. His wife was from the same town as Pastor Peter, which brought Javed into contact with Peter.

After 13 years of Gospel proclamation and demonstration from his wife, Pastor Peter and others, Javed came to faith. His family cut off contact with him as a result, and he now runs a tea stall for a living instead of working the comfortable government job he previously held.

He continues to dress like a mullah, which opens numerous doors for ministry that are closed to others.

Born and raised Muslim, Fahad enjoyed reading religious scriptures as a boy. He read so much that he developed a reputation as a learned mullah (Islamic scholar) by age 17. He read about other faiths too, but their religious texts were difficult to obtain in the Kashmir Valley. One day he found a New Testament on the road, and read it cover-to-cover within a few days.

After reading Hindu and Baha’i scriptures as well, he left Islam and became agnostic. When Kashmir received internet access, he began watching videos of Christian philosophers and apologists like Alvin Plantinga and William Lane Craig.

Through these videos, he came to faith in Christ.

Young and fearless, he began debating openly with mullahs, atheists, and members of other faiths. He can easily share his faith because of his reputation as a scholar, but he routinely faces opposition from local mullahs.

Staggeringly he held Christian beliefs for 14 years before meeting another Kashmiri Christian – an indication of how few there are. In 2014, he met Pastor Peter, who baptized him.

Fahad is now the voice of a Kashmiri-language Christian radio station run by our Kashmir partners; its broadcasts reach both the Indian and Pakistani sides of Kashmir.

Peter, Javed, Fahad, and so many others like them are the people you support when you partner with Harvest Bridge.

Our Kashmiri missionaries vividly demonstrate Harvest Bridge’s ministry model: coming alongside local South Asian Christians who are doing much with little, and who know how best to reach their people for Christ.

Please pray for Kashmir – for peace, resolution of its political problems, and the needs of its people to be holistically met.

Thank you for equipping us to advance God’s work in Kashmir and throughout South Asia. 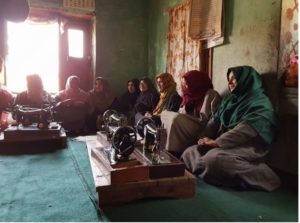 KASHMIR Below are the Kashmir prayer updates since the 1st of August 2021.  April 29 Sarah, Kashmir Shalom everyone 🕊By the grace of God and by the prayer